Good communication is crucial to any relationship, especially when partners are separated by distance. This also holds true for microbes in the deep sea that need to work together to consume large amounts of methane released from vents on the ocean floor. Recent work at Caltech has shown that these microbial partners can still accomplish this task, even when not in direct contact with one another, by using electrons to share energy over long distances.

This is the first time that direct interspecies electron transport—the movement of electrons from a cell, through the external environment, to another cell type—has been documented in microorganisms in nature.

The results were published in the September 16 issue of the journal Nature.

"Our lab is interested in microbial communities in the environment and, specifically, the symbiosis—or mutually beneficial relationship—between microorganisms that allows them to catalyze reactions they wouldn't be able to do on their own," says Professor of Geobiology Victoria Orphan, who led the recent study. For the last two decades, Orphan's lab has focused on the relationship between a species of bacteria and a species of archaea that live in symbiotic aggregates, or consortia, within deep-sea methane seeps. The organisms work together in syntrophy (which means "feeding together") to consume up to 80 percent of methane emitted from the ocean floor—methane that might otherwise end up contributing to climate change as a greenhouse gas in our atmosphere.

Previously, Orphan and her colleagues contributed to the discovery of this microbial symbiosis, a cooperative partnership between methane-oxidizing archaea called anaerobic methanotrophs (or "methane eaters") and a sulfate-reducing bacterium (organisms that can "breathe" sulfate instead of oxygen) that allows these organisms to consume methane using sulfate from seawater. However, it was unclear how these cells share energy and interact within the symbiosis to perform this task.

Because these microorganisms grow slowly (reproducing only four times per year) and live in close contact with each other,  it has been difficult for researchers to isolate them from the environment to grow them in the lab. So, the Caltech team used a research submersible, called Alvin, to collect samples containing the methane-oxidizing microbial consortia from deep-ocean methane seep sediments and then brought them back to the laboratory for analysis.

The researchers used different fluorescent DNA stains to mark the two types of microbes and view their spatial orientation in consortia. In some consortia, Orphan and her colleagues found the bacterial and archaeal cells were well mixed, while in other consortia, cells of the same type were clustered into separate areas.

Orphan and her team wondered if the variation in the spatial organization of the bacteria and archaea within these consortia influenced their cellular activity and their ability to cooperatively consume methane. To find out, they applied a stable isotope "tracer" to evaluate the metabolic activity. The amount of the isotope taken up by individual archaeal and bacterial cells within their microbial "neighborhoods" in each consortia was then measured with a high-resolution instrument called nanoscale secondary ion mass spectrometry (nanoSIMS) at Caltech. This allowed the researchers to determine how active the archaeal and bacterial partners were relative to their distance to one another.

To their surprise, the researchers found that the spatial arrangement of the cells in consortia had no influence on their activity. "Since this is a syntrophic relationship, we would have thought the cells at the interface—where the bacteria are directly contacting the archaea—would be more active, but we don't really see an obvious trend. What is really notable is that there are cells that are many cell lengths away from their nearest partner that are still active," Orphan says.

To find out how the bacteria and archaea were partnering, co-first authors Grayson Chadwick (BS '11), a graduate student in geobiology at Caltech and a former undergraduate researcher in Orphan's lab, and Shawn McGlynn, a former postdoctoral scholar, employed spatial statistics to look for patterns in cellular activity for multiple consortia with different cell arrangements. They found that populations of syntrophic archaea and bacteria in consortia had similar levels of metabolic activity; when one population had high activity, the associated partner microorganisms were also equally active—consistent with a beneficial symbiosis. However, a close look at the spatial organization of the cells revealed that no particular arrangement of the two types of organisms—whether evenly dispersed or in separate groups—was correlated with a cell's activity.

To determine how these metabolic interactions were taking place even over relatively long distances, postdoctoral scholar and coauthor Chris Kempes, a visitor in computing and mathematical sciences, modeled the predicted relationship between cellular activity and distance between syntrophic partners that are dependent on the molecular diffusion of a substrate. He found that conventional metabolites—molecules previously predicted to be involved in this syntrophic consumption of methane—such as hydrogen—were inconsistent with the spatial activity patterns observed in the data. However, revised models indicated that electrons could likely make the trip from cell to cell across greater distances.

"Chris came up with a generalized model for the methane-oxidizing syntrophy based on direct electron transfer, and these model results were a better match to our empirical data," Orphan says. "This pointed to the possibility that these archaea were directly transferring electrons derived from methane to the outside of the cell, and those electrons were being passed to the bacteria directly."

Guided by this information, Chadwick and McGlynn looked for independent evidence to support the possibility of direct interspecies electron transfer. Cultured bacteria, such as those from the genus Geobacter, are model organisms for the direct electron transfer process. These bacteria use large proteins, called multi-heme cytochromes, on their outer surface that act as conductive "wires" for the transport of electrons.

Using genome analysis—along with transmission electron microscopy and a stain that reacts with these multi-heme cytochromes—the researchers showed that these conductive proteins were also present on the outer surface of the archaea they were studying. And that finding, Orphan says, can explain why the spatial arrangement of the syntrophic partners does not seem to affect their relationship or activity.

"It's really one of the first examples of direct interspecies electron transfer occurring between uncultured microorganisms in the environment. Our hunch is that this is going to be more common than is currently recognized," she says.

Orphan notes that the information they have learned about this relationship will help to expand how researchers think about interspecies microbial interactions in nature. In addition, the microscale stable isotope approach used in the current study can be used to evaluate interspecies electron transport and other forms of microbial symbiosis occurring in the environment.

These results were published in a paper titled, "Single cell activity reveals direct electron transfer in methanotrophic consortia." The work was funded by the Department of Energy Division of Biological and Environmental Research and the Gordon and Betty Moore Foundation Marine Microbiology Initiative. 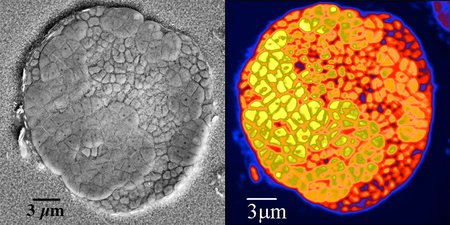 Electron microscopy (left), and nanoSIMS analyses (right) of slices of individual microbial consortia allowed for unambiguous identification and analysis of thousands of individual cells. nanoSIMS images such as this one give a quantitative picture of the isotopic composition of each cell, and in turn, a measure of each cell's biosynthetic activity in relationship to each cell's neighbors. Credit: Shawn McGlynn/Caltech 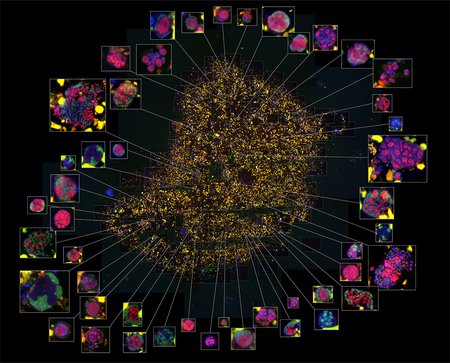 Pictured is a high magnification image of sediment enriched in syntrophic consortia. In the center of the image is an overview of sediment containing cells, and individual - roughly spherical - microbial communities are shown at high magnification at the ends of lines extending from the center. Fluorescent signals show the ANME-2c archaeal subgroup in red, and sulfate reducing bacteria are shown in green. Sediment particles appear yellow. Credit: Grayson Chadwick/Caltech The samples of bacteria and archaea from the ocean floor were collected from the methane seeps at Hydrate Ridge, just 62 miles off the coast of Oregon. Using a three-person submersible called Alvin, the researchers navigated to sites for sampling of background sediment as well as sediment from the bubbling methane seeps. Video shows the vehicle's robotic arm collecting a push core of methane seep sediment overlaid with an orange microbial mat. Credit: Victoria Orphan and edited by Roland Hatzenpichler/Caltech
Image Gallery Lightbox 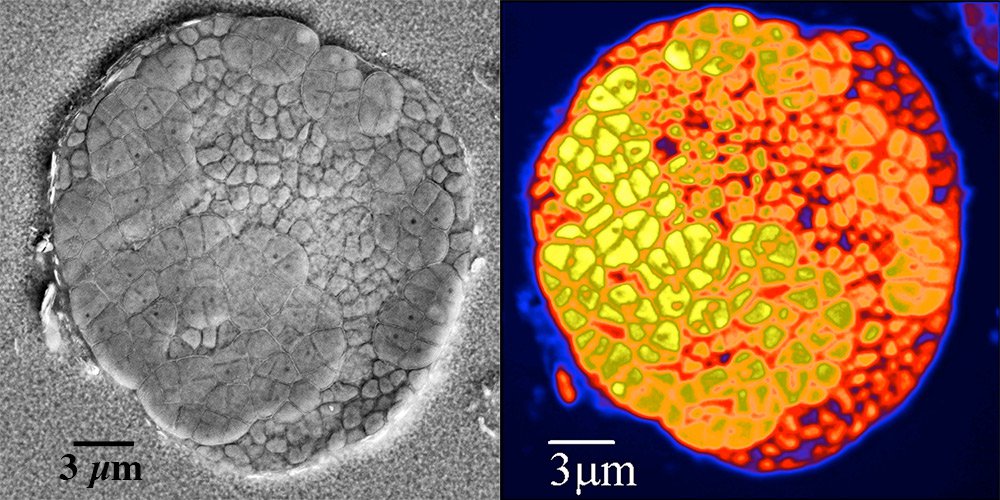 Electron microscopy (left), and nanoSIMS analyses (right) of slices of individual microbial consortia allowed for unambiguous identification and analysis of thousands of individual cells. nanoSIMS images such as this one give a quantitative picture of the isotopic composition of each cell, and in turn, a measure of each cell's biosynthetic activity in relationship to each cell's neighbors.
Credit: Shawn McGlynn/Caltech
Download Full Image 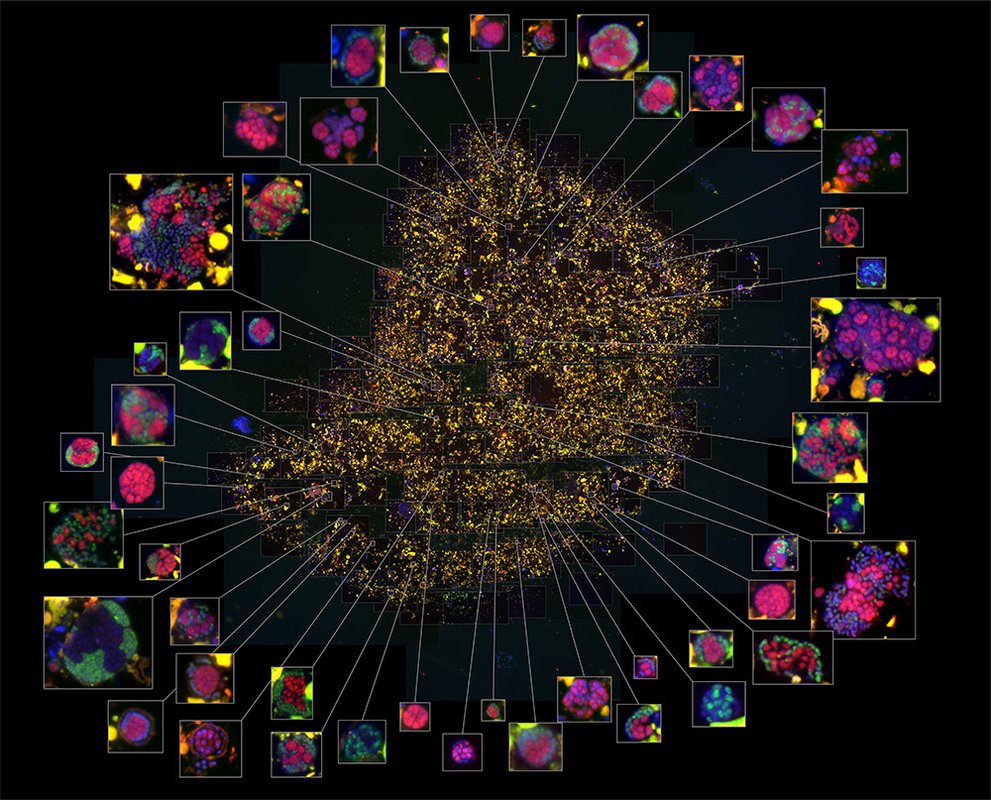 Pictured is a high magnification image of sediment enriched in syntrophic consortia. In the center of the image is an overview of sediment containing cells, and individual - roughly spherical - microbial communities are shown at high magnification at the ends of lines extending from the center. Fluorescent signals show the ANME-2c archaeal subgroup in red, and sulfate reducing bacteria are shown in green. Sediment particles appear yellow.
Credit: Grayson Chadwick/Caltech
Download Full Image