As the saying goes, every cloud has a silver lining. Even when that cloud is 109,000 metric tons of methane.

The Aliso Canyon leak, which began on October 23, 2015 at a SoCalGas natural gas storage facility and took nearly four months to plug, was one of the largest environmental disasters in U.S. history, triggering the evacuation of more than 6,800 nearby households.

The sudden flood of natural gas—a mixture of mostly methane and ethane—offers scientists a unique opportunity to study how the environment responds. Methane is the second-most prevalent greenhouse gas after carbon dioxide (CO2) and, like CO2, is rapidly increasing in concentration in the atmosphere globally. As such, scientists are interested in learning more about the mechanisms that nature already has in place to cope with fluctuations in methane levels—as well as the limitations of those mechanisms.

"The Aliso Canyon leak is disaster but it's also an opportunity to study this unusual environmental perturbation experiment," says Victoria Orphan, James Irvine Professor of Environmental Science and Geobiology at Caltech. Since December 2015, Orphan has been collaborating with Caltech associate research scientist Patricia Tavormina to study the growth and composition of microbial communities in the soil around the affected area.

Aliso Canyon has served as a natural gas storage facility for decades. In 1938, J. Paul Getty's Tidewater Associated Oil Company discovered an oilfield north of the Porter Ranch neighborhood of Los Angeles in the northwestern San Fernando Valley. Oil production peaked in the 1950s with about 118 active wells, then tapered off. Some 32 wells still remain, but starting in the 1970s the bulk of the oilfield was converted into a natural gas storage facility.

Geologically, as a depleted oil field, Aliso Canyon is an ideal natural gas storage facility. With the oil pumped out, what remains is a region of porous rock about 9,000 feet below the surface through which gas can freely flow, topped by an impermeable capstone. It's one of the largest such facilities in the U.S., reaching an average depth of 9,000 feet and capable of storing 86 billion cubic feet of natural gas. SoCalGas purchases natural gas from around the country and ships it to the site, where it is injected beneath the capstone and into the porous rock via 115 gas injection wells; when needed, the gas is pumped back out through those conduits. During the leak event, one of those wells, located about a mile north of homes in Porter Ranch, ruptured at a depth of about 300 feet, above the capstone.

SoCalGas tried several "top kills" to plug the leak—that is, injecting a slurry of mud and brine down the well in an attempt to plug it. The top kill failed, as high pressures inside the methane-packed porous rock repeatedly blew the plug back out again. The leak was finally plugged in February 2016, thanks to a newly constructed well that allowed SoCalGas to relieve the pressure on the damaged well and permanently plug the leak.

Previously, Orphan and Tavormina, in collaboration with Professor Samantha Joye at the University of Georgia, studied the effects of the 2010 Deepwater Horizon oil spill—which released nearly 5 million barrels of oil into the Gulf of Mexico near the Mississippi River Delta—on marine microbial communities.

Now they want to know if and how microbes in the soils of Aliso Canyon are able to survive and adapt to the sudden spike in local methane levels. To do so, they first collect soil samples both around the wellhead and within the nearby community.

The process of taking samples at Aliso Canyon starts out low tech. The researchers use a one-meter length of polyvinyl chloride (PVC) pipe that has been split lengthwise and then bound back together. They hammer this hollow cylinder into the ground as far as it will go (usually about half a meter) and then pull it up, separate the halves, and remove the soil inside. So far, they have taken 63 soil cores, about 16 of which are right by the wellhead. They anticipate that they will be collecting samples at least through February 2017.

The samples are brought back to Orphan's Caltech lab, where they are processed and analyzed.

"The first thing we do is look for changes in the population of soil microorganisms. If I see changes throughout the overall population across space or time, that's an indication that the population is responding to the gas—the population is being shaped, or structured, by the gas," Tavormina says.

In addition to monitoring the changing demographics of the microbial population, the researchers physically count the most promising bacterial species—the ones that seem to be responding most to the natural gas. They enumerate how many of certain bacteria are in these samples and grow specific bacteria out of the soil and then ask what happens when the organisms are fed different components of natural gas, like methane.

It isn't just as simple as saying that every change in the microbes is driven by methane, however. Depending on its source, natural gas contains a varying percentage of ethane, which could also be driving changes in microbial communities.

Further, the process that microbes use to break down methane contains several steps, each of which affects the environment of every other microbe in the immediate area. There are multiple pathways for breaking down methane and converting it into energy that microbes can consume. In general, the first step converts it to methanol, breaking down methanol yields formaldehyde, and so on. Microbes exist in complex heterogeneous communities that often work together to complete different steps of the process.

"Imagine two microorganisms talking to each other: 'I can use your formaldehyde. You keep metabolizing the methane, and I'll take care of this step.' So it becomes like an assembly line," Tavormina says.

Microbes that consume methane, known as methanotrophs, do so using an enzyme called particulate methane monooxygenase (pMMO). Measuring pMMO levels gives researchers a proxy by which they can estimate the number of methanotrophs in a sample. As such, when Orphan and Tavormina analyzed the soil samples from Aliso Canyon, they expected to find high levels of pMMO near the blowout.

"Most soils have some methanotrophic bacteria, but we were getting only a weak molecular signal for pMMO," Orphan says. "You'd figure that the closer you get to the gas blowout, you'd see more evidence of methanotroph enrichment, but we didn't, which was unexpected."

Instead, they discovered increasing numbers of an uncommon bacterial species that had not been previously cultured in a lab. This as-yet-unnamed microbe uses a different version of the pMMO enzyme—one that is ferried around by the bacterium within a circular piece of DNA called a plasmid. Plasmids can reproduce independently of the rest of the bacterial genome, making them easier to share with other organisms—making it possible that this microbe is sharing the genes for processing methane with other species of microbes.

"We're seeing whole new species and groups of microorganisms that we didn't think consumed hydrocarbons, and finding that they are definitely involved in metabolizing it," Tavormina says.

Down the line, understanding how microbes react to and process methane could help mitigate future disasters. Tavormina says it is not too far-fetched to imagine clean-up crews armed with soil mats filled with methanotrophic microbes responding to leaks.

For now, Orphan and Tavormina will continue to study nature's response to the leak—and shine a light on microbes' seemingly endless ability to survive and thrive under whatever circumstances they face.

This research is funded by the National Science Foundation. 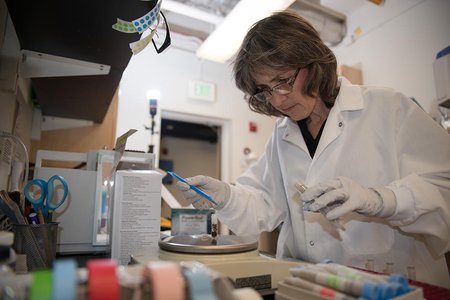 Patricia Tavormina, associate research scientist at Caltech, removes a small amount of soil from the frozen samples, for DNA extraction. Even as little as a half gram of soil can provide information on thousands of different bacterial species. [VIEW THE SLIDESHOW] Credit: Caltech
Image Lightbox 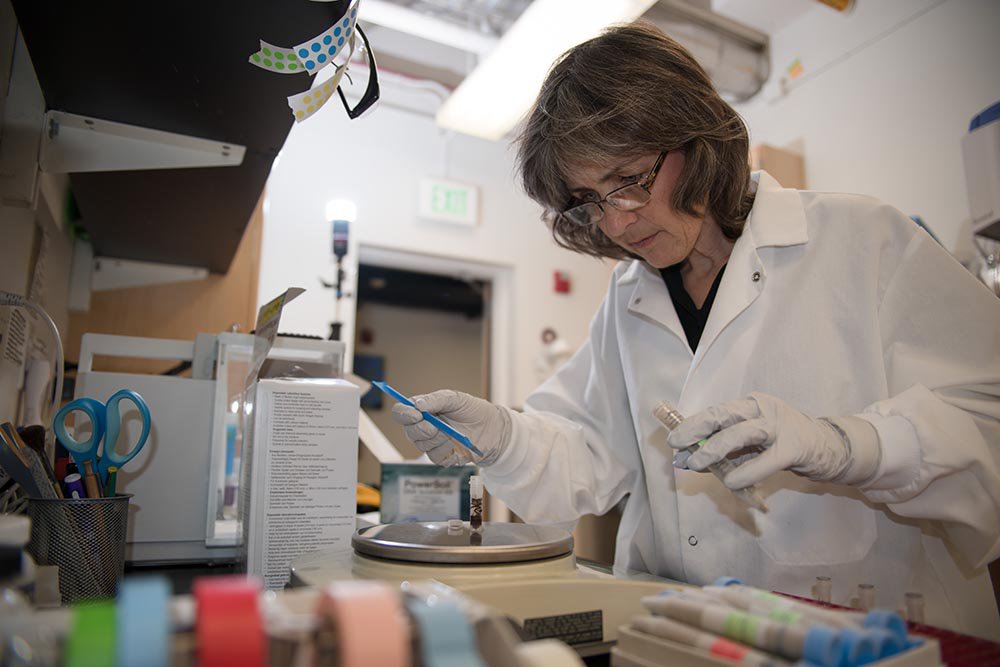 Patricia Tavormina, associate research scientist at Caltech, removes a small amount of soil from the frozen samples, for DNA extraction. Even as little as a half gram of soil can provide information on thousands of different bacterial species. [VIEW THE SLIDESHOW]
Credit: Caltech
Download Full Image
Subscribe
The Caltech Weekly